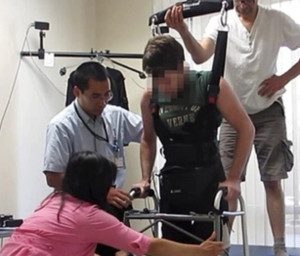 The Guardian recently published an article about a system that enabled a paralyzed man to walk again by rerouting signals from his brain to electrodes on his knees. This is very similar to the (more advanced) technology envisioned in my new novel, No Hard Feelings. The major components of the system:

are exactly the same as the “Neurostimix” system in the book. To quote from the article:

The man walked a 3.5-metre course after being fitted with an electrode cap that picks up brain waves and beams them wirelessly to a computer, which decipher the waves as an intention to stand still or walk. The relevant command is then sent to a microcontroller on the man’s belt, and on to nerves that trigger muscles to move the legs.