All About Photo Interview

Questions Mark answered in an interview for All About Photo.

When did you realize you also wanted to become a photographer?

I’ve been interested in photography for a long time. I had a darkroom with a friend in grade school where I developed and printed pictures I took with an old 35mm Bolsey rangefinder camera my father gave me, but didn’t really get serious about it until my mid-30’s when I took a view camera class with Mark Citret.

Where did you study photography? With whom?

I’ve taken a number of classes and workshops with Mark Citret. While Mark is primarily a large-format photographer and I was initially interested in large format as well, I’ve evolved into more of “street photographer” using digital 35mm equivalents. However, I believe the training in large format has given me a deeper appreciation of composition, depth of field and exposure that is quite beneficial in making my images.

Do you take photographs between books or at the same time?

I move fluidly between writing and photography, doing both pretty much at the same time. When I photograph to illustrate my novels, of course, the two are yoked together in the service of the same goal.

Does your writing influence your photography or vice versa?

A bit of both. Originally, I was using photography to document street scenes I wanted to describe in my books. Then I hit upon the idea of including the photos I was taking in the books. Later I began to alter the plot of my books to have an excuse to include photos I liked that I had taken without reference to a particular scene.

What led you to photography and why?

In the very beginning, it was the photos my father had taken during the Korean War with the 35mm Bolsey camera he eventually gave me. My mother recently found a box of his old negatives and slides, and several images—particularly of Korean children—are quite good.

Do you remember your first shot? What was it?

What was your first paid assignment/job?

The first print I sold was the photo of two chess pieces on a board that was used for the cover of my first novel, The Immortal Game. Several bookstores carried prints of the photo to sell to collectors who had enjoyed the book.

What or who inspires you?

I photograph street scenes from cities throughout the world. What inspires me most is capturing groups of people interacting or engaged in a common activity, rather than simply taking street portraits of individuals, although I have plenty of those in my portfolio.

How could you describe your style?

I like sharply focused images with a full tonal range, pulling in as much detail as I can in the shadows. Most all my work is black and white with a colder toning.

Do you have a favorite photograph or series?

“Geisha Confidential.” It was taken one evening in Kyoto, Japan. I was walking down a back street in the older part of town when a cab with a geisha pulled up. The cab driver went in to an adjacent building to retrieve a second geisha. The photo documents the moment when the second joined the first and they began an urgent conversation.

I like the image both because I was so extraordinarily fortunate to be in a position to take it and because I did a fair amount of editing to achieve the nourish atmosphere (I believe) it conveys.

Bluesman and the Blonde

What kind of gear do you use? Camera, lens, digital, film?

I mostly use Fujifilm rangefinder digital cameras, which is perhaps appropriate since my first camera was the Bolsey rangefinder. I also have a full-frame Nikon DSLR that I use for non-street photos.

What is the influence of digital technology on your photography?

Although my serious interest in photography began with my involvement with large format film photography, I was never that good a printer. It wasn’t uncommon for me to like the Polaroid proof I took of a particular shot more than I did of the final print. If, as Ansel Adams said, the negative is the score and the print is the performance, I was blowing it during the performance. Digital has made me a better performer.

Do you spend a lot of time editing your images? For what purpose?

I do a fair amount of editing. I often crop, convert to black and white, dodge and burn where necessary and try to make sure I’ve gotten as much detail in the shadows as I can. I also tone my images on the colder range of the scale.

How do you choose your subjects?

Oh, there are so many. Mark Citret, of course. From there, in no particular order, Sally Mann, Edward Weston, Ruth Bernhard, Eugène Atget, Diane Arbus, Robert Frank, Henri Cartier-Bresson.

What advice would you give a young photographer?

I can’t tell you how to do this, but I do believe it is important: to develop one’s own style. It took me a long time to do it, and I only realized I had done so long after the achievement. It’s not a paint-by-numbers type goal.

What mistake should a young photographer avoid?

Although I’ve been guilty of it myself, I see a lot of photographers over-manipulating images. Perhaps it’s the influence of Instagram filters.

What are your projects?

I shoot continuously in my home city of San Francisco, but for some reason, my best photos seem to come during travel to foreign countries. I’m planning a trip to several new (to me) European cities this summer. 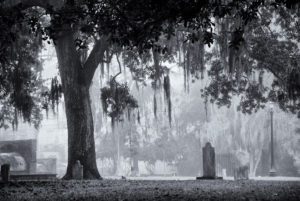 Your best memory as a photographer?

When the Patricia Cornwell’s publisher contacted me about using my photo of Savannah’s Colonial Park Cemetery for the end papers of her novel Red Mist.

Your worst souvenir as a photographer?

Over-exposed 4×5 negative of what I was certain to be a great shot when I didn’t properly seat the bag bellows of my large format camera.

The compliment that touched you most?

When my mother hung one of my (really not very good) photos in her living room next to a watercolor by very accomplished artist.

Along the Way by Mark Citret.

An anecdote that comes to your mind?

I lived next to Ruth Bernhard in San Francisco for several years. I’m embarrassed to admit that I didn’t really understand her importance to the photography world until I met her at a party.

Another anecdote: when I shut down my darkroom, I sold my sink to music photographer Tom O’Neal, who photographed the cover of Crosby, Stills, Nash and Young’s Deja Vu album.