How Raymond Chandler was reunited with his wife Cissy on Valentine’s Day, 2011.

Raymond Chandler, who with Dashiell Hammett perfected the American hard-boiled detective novel, died a lonely man in 1959. Buried at the expense of the county at Mount Hope Cemetery in San Diego, California, he was widowed, childless, and isolated at the time of his demise. A mere 17 people attended Chandler’s funeral. None of them prominent. Few of them close to the author.

His wife, the former Cissy Pascal, to whom he had been married for 30 years, predeceased him by almost half a decade. Although they’d had their difficulties–Chandler cheated on her for one thing, and she misrepresented her (much greater) age for another–they were very much in love and their parting undoubtedly shortened his own life. Months after her passing, Chandler tried to kill himself with a revolver and the pace of his already prodigious drinking increased.

Chandler had Cissy cremated, and the urn that held her remains was placed in storage in Cypress View Mausoleum, not far from Mount Hope. He never got around to doing anything more with that urn. There is every reason to believe Chandler intended for her to be buried with him when he died, but his will didn’t address the issue, and no one who knew of his wishes was involved in the funeral arrangements. As a result, the urn sat on a shelf in a storage room at the mausoleum for more than 56 years.

All of that changed Monday, Valentine’s Day, 2011 when a court order secured at the behest of Chandler aficionado Loren Latker, whose Web site, Shamus Town, documents Chandler locations in Los Angeles, paved the way for them to be reunited at Chandler’s Mount Hope grave.

Although the sentiment behind the inscription on playwright William Shakespeare’s tombstone, “Curst be he that moves my bones,” has informed English common law in the matter of moving remains for centuries, Latker and his attorney, Aissa Wayne (the daughter of actor John Wayne), argued that Cissy’s “cremains” were not interred in a permanent resting place. They noted that the storage room at Cypress View Mausoleum was not open to the public and was also home to prosaic items such as garden tools. Furthermore, the mausoleum was free to dispose of the cremains at any time, as California law stipulates that unclaimed remains need only be held for a year.

Said Superior Court Judge Richard Whitney in ruling to permit the transfer, “I’m not happy with that fact that any person’s remains, whether it’s Mrs. Chandler or anyone’s, are sitting in a storage facility.” 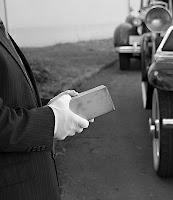 The ceremony Latker and his wife, Dr. Annie Thiel-Latker, arranged to reunite the couple was thoughtful and well planned. It began on Monday with a procession of vintage automobiles, including a 1927 Cadillac, a 1936 Cadillac convertible, and a 1929 Graham Paige limousine. These were used to transport Latker and those people most closely involved with the project, as well as a group of dignitaries and of course Cissy’s urn, the short distance from Cypress View Mausoleum to Chandler’s Mount Hope gravesite.

A crowd of approximately 100 people, plus the Crown Island Jazz Band, waited to received them. Once everyone was assembled at the gravesite, Latker took to a podium and briefly explained the history of the effort to reunite this couple. Other speakers followed, including his wife, Annie, who recited Shakespeare’s Sonnet 116 (on marriage), and Ann Hill, trustee of the San Diego Historical Society, who spoke about Chandler and Cissy’s ties to California and the San Diego area.

Next up was film and television actor Powers Boothe. Boothe is known for his Emmy Award-winning 1980 portrayal of Jim Jones, his role as Cy Tolliver on Deadwood, and for donning a trench coat and fedora to play Chandler’s private-eye protagonist in the 1980s HBO-TV series Philip Marlowe, Private Eye. Boothe gave a spirited reading of excerpts from Chandler’s work, mining such themes as drinking, Hollywood, and women–most particularly blondes. I especially enjoyed his reading of Marlowe’s categorization of the different types of blondes in the world, misogynistic though it may be. (“There are blondes and blondes and it is almost a joke word nowadays .”)

Novelist, essayist, and biographer Judith Freeman spoke after Boothe. As the author of The Long Embrace: Raymond Chandler and the Woman He Loved (2008), Freeman was an appropriate choice. She read several passages from her book, including this quote from a Chandler letter describing his relationship with his then deceased wife:

She was the beat of my heart for thirty years. She was the music heard faintly around the edge of the sound. It was my great and now useless regret that I never wrote anything really worth her attention, no book I could dedicate to her. I planned it. I thought of it, but I never wrote it. Perhaps I couldn’t have written it.

While Chandler’s original grave marker was not removed, a new marker inscribed with both his and Cissy’s birth and death date information, and the Chandler quotation, “Dead men are heavier than broken hearts,” had been set at the foot of the grave. At the conclusion of the service, Reverend Gardner gently placed Cissy’s urn in the earth between those two markers. 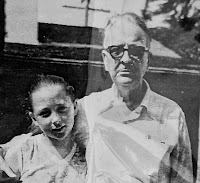 Latker hosted a reception following the service and invited several other attendees to say a few words. One such speaker was Sybil Davis, whose mother, Jean Fracasse, worked for Chandler as his secretary during the turbulent time in Chandler’s life after Cissy died. Chandler developed a romantic interest in Fracasse, which was evidently not reciprocated, but which didn’t stop Chandler from lavishing a lot of attention on her and her children, and at one point, making his will out to her.

Davis and her mother were in attendance at Chandler’s 1959 funeral, and she explained that Chandler gave her and her mother (now deceased) a number of his processions, including Cissy’s diamond wedding ring, Chandler’s monogrammed silver cigarette case, and his ostrich-skin wallet. She showed those items to the reception attendees and also displayed a photograph of her as a child with Chandler (see above).

The high point of this reception, though, was a toast drunk with gimlets in Cissy and Chandler’s honor, just as Philip Marlowe toasted the memory of his friend Terry Lennox in Chandler’s best (and appropriately named) novel, The Long Goodbye.

(This article was edited by J. Kingston Pierce and originally appeared in the Rap Sheet.)