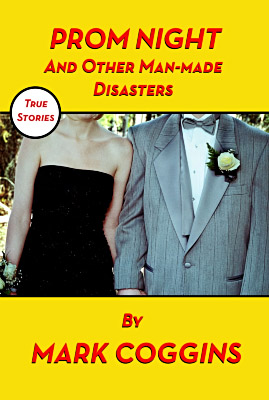 If Mark Coggins’s life were a supermarket, the stories from Prom Night and other Man-made Disasters would be the aisle markers. Meander through the nostalgic, riotous, and sometimes cringe-inducing wares Coggins offers up in his version of Whole Fool. Whether he’s staking out the house of his two-timing, belly-dancing girlfriend, deep sea diving with equipment fashioned from tire chains, a trash can and a garden hose, or donning an oversize waterfowl outfit to win the heart of the one who got away, Coggins writes with honesty, self-effacing humor and warmth.

Brett Singer may not be a familiar name, but she has the distinction of coming from a great writing family, being the granddaughter of I. J. Singer and the grandniece of Isaac Bashevis Singer. And when The Petting Zoo—the novel she was working on when I took her creative-writing class at Stanford — was published, it was hailed by one critic as “The Catcher in the Rye for the ’80s.”

But neither Ms. Singer’s pedigree nor the success of her future book were uppermost in my mind when I studied with her as an undergrad. What was uppermost was Ms. Singer. Although she was only a few years older than I was, she seemed bohemian, worldly-wise, and alluring in a European — or, at the very least, an East of the Mississippi — kind of way. She graduated from Vassar. She had long straight hair and gamine good looks. She toted her cigarettes around in the front waistband of her skirt, and nothing was more provocative than watching her pull one out and light up.

This being a writing class, and my being the tongue-tied, would-be lothario that I was, there was only one way these feelings were going to find an outlet: as short stories with thinly veiled versions of us as lovers. I recently located the last remaining dittoed copies of these literary gems and felt the brightly burning shame of authorship.

One story is titled “Sunstroke and Seduction” and features our star-crossed lovers on a park bench talking about having sex in a way your Subaru mechanic might discuss motor-oil viscosity. But in a surprising twist at the end, we learn that the narrator (yours truly) might be suffering from sunstroke and therefore is dreaming the whole thing.

Another piece, “Operating,” advances the art of fiction only slightly by incorporating a plot. In it, a hospital orderly (guess who?) discovers a newspaper reporter (Brett) masquerading as a patient to get the goods on malpractice claims at the hospital. Seeking to enlist the orderly in her fact-finding mission, the reporter (naturally) induces him to have sex with her on her hospital bed. Hilarity ensues when they are discovered in flagrante delicto by a male nurse; the orderly is physically restrained; and the reporter is mistakenly scheduled for unnecessary heart surgery. Fortunately, the orderly escapes in time to prevent any actual cutting.

As you may have surmised, the writing is uniformly bad in both of these stories, but developmental psychologists, at least, may learn more about the warped id of males in their late teens from the initial description of the Brett character in “Operating.” She is lying in bed eating a bright red apple, wearing one-piece zippered pajamas with feet in them. One can only assume that the apple is some sort of Eve-in-the-Garden temptation symbol. But the pj’s? A friend suggested that they are a message from my subconscious that Brett wasn’t sexually available to me, seeing how the character was covered head to foot and all. My friend is certainly correct about Brett’s unavailability, but I find it hard to credit that my subconscious knew the score.

Of course, the whole point of writing these stories was to have Brett read them and, more important, spend office hours alone with me discussing them. To her credit, she never let on that she recognized us as characters, and she did her best to make suggestions to improve them — which was something like trying to resuscitate cube steak.

I, on the other hand, had little or no interest in the stories per se, but I did all I could to steer the conversation to sex. I had recently discovered the clitoris (like Columbus “discovered” North America) and I remember one very awkward office session when I managed to introduce the word into our discussion. Brett did her best to maintain her game face, but whether because I mispronounced the word or because it was such an obvious reach, she wasn’t entirely able to suppress a smile. Even I recognized that the smile was not the sort that signaled titillation or interest; it was the sort that signaled amusement — amusement at juvenile behavior.

I slunk out of the office after that and actually began to produce more serious work. One effort was a first draft of a story that would eventually be published, and another a weighty morality tale. Brett noticed the change. Her summary comments from my final assignment mention that she felt I had improved substantially during the class. And, in a tremendous act of charity, she assigned me a grade of A-for the quarter.

I never saw Brett again, but shortly after I graduated, I was in a bookstore and I ran across a hardcover copy of The Petting Zoo. Her picture took up most of the back cover, and I decided to buy the book, if only to possess her image. I didn’t think I would enjoy what the jacket flap told me was a tragic love story involving twenty-year-old protagonists (I was twenty-one, after all), but when I cracked the covers, I found to my surprise that I liked and admired the book very much. I was not alone. In addition to the critic who had compared the book to The Catcher in the Rye, there was a short but positive mention in the New York Times and the notoriously cranky Kirkus Reviews called it “an impressive debut… a major first novel.”

Finding the book to my liking was not the only surprise: the other was that there was a character named after me.

Of course, I can’t say for sure that the character was truly named for me, but I did know that Brett was working on the novel when I took her class. I also knew that Coggins is an unusual last name. In fact, the only other mention of it in fiction that I know of is in Chitty Chitty Bang Bang (the junkyard owner has the moniker). Furthermore, I felt certain that Brett had realized that I based characters on her in my stories, and given my behavior, it didn’t seem at all beyond the pale that she would return the favor.

But what sort of character did she name after me? The first time I told the story — in response to the question about how I started writing — was at the prestigious Squaw Valley Writers Conference, nearly twenty years after I read The Petting Zoo. The way I told it then, and the way I’ve told it for the almost ten years since, is that the Coggins character is a lecherous professor who hits on all of his attractive female students.

This always gets a big laugh from audiences at my book signings because it is the perfect comeuppance. The real Coggins uses his short stories to make lewd suggestions to his attractive college instructor, so the instructor in turn creates a fictional Coggins who teaches at a university doing the very same thing to his students.

But the problem is that this is not the Coggins in The Petting Zoo. As I discovered when I reread the book, the Coggins in The Petting Zoo is, of all things, the director of a writing conference. That doesn’t sound bad on the face of it, but it turns out that this Coggins has a special curse. To quote from page 89 of the book: “Coggins is the director, the top luminary. Although the only thing he’s ever written is a scholarly book, a dialectical analysis of writer’s block, everyone is afraid of him.”

I’m not sure what trick of memory made me recall the character incorrectly. Maybe it was guilt over my behavior, maybe it was a subconscious desire to make the story sound rounder and fuller. But now, with the passage of years and my achievement of modest success as a novelist, being cast as writer who can only write about writer’s block — and inspires fear to boot — represents by far the bigger karmic payback.

I wonder if the punishment Brett engineered for me was more layered and nefarious than I had imagined. I wonder if she endowed me with just enough skill to make it as a novelist, and then when I reached the pinnacle — or should I say hillock?—of my career, she came back to put me in my place.

Then again, I wonder if she picked the Coggins name at random with no thought of me.

Whatever the case, I only hope that when Brett sits down to assemble a volume of her collected works, she considers turning me back into the lecherous professor. It’s easier on the ego, and it does make a better story.

The Space Between All Other Books