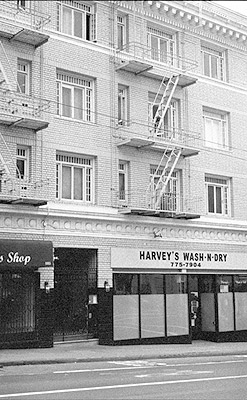 891 Post Street #401, San Francisco, CA is billed as the home of Dashiell Hammett and Sam Spade.

Hammett lived in the building during the period he wrote his first three novels and he put Spade in the same building in The Maltese Falcon. With a close reading of the Falcon text, and a comparison of the other apartments in the building, Hammett scholars have determined that #401 is the most likely to be Spade’s and Hammett’s, although there are no records of the particular apartment in which Hammett lived.

As part of the building dedication as a literary landmark, I had the opportunity to tour #401 and meet Hammett’s only living daughter, Jo Hammett. Also in attendance were Julie Rivett, his granddaughter, and Richard Layman, his biographer and editor of both the recent anthology of Hammett letters and the memoir Jo published about her father. 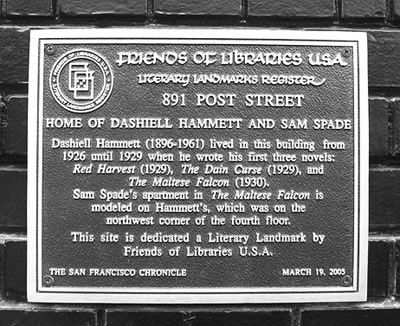 Don Herron, leader of the famous Dashiell Hammett San Francisco tour–and author of the accompanying guidebook–was also present. When it came our turn to go up into the apartment, he strongly recommended taking the stairs. Apparently he’d been trapped in the elevator when it dropped to the basement after being overloaded with a mere four people.

Here’s the view of the corridor from the fourth floor landing: 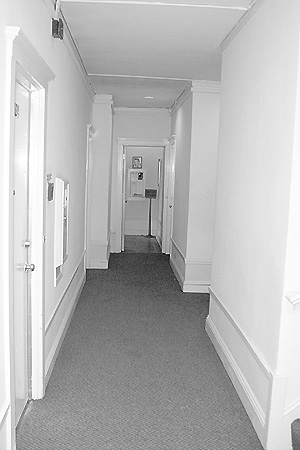 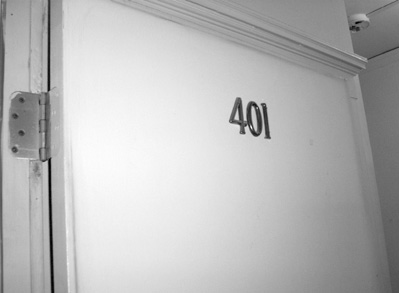 And here’s a floor plan that was included in the pamphlet printed up for the dedication: 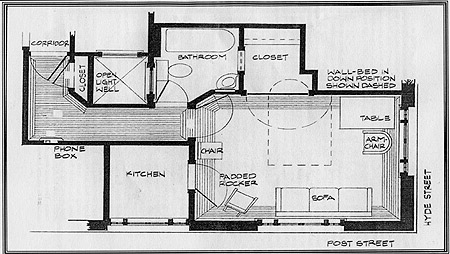 Inside the apartment we were greeted by Bill Arney, the current occupant of the apartment, Bill’s mother and Jo Hammett herself. This San Francisco Weekly article has more on Bill and why he and other experts believe #401 is the correct apartment.

Walking down the L-shaped hallway to the combination living room/bedroom (pulling down the wall-bed transforms it), we passed a small bathroom. In the Falcon, Spade is fooled by Gutman into thinking that Brigid O’Shaughnessy has secreted some money on her person, so he forces her to strip in the bathroom. He sits on the tub while she does it, with Gutman and the rest of his crew waiting in the other room. Here’s the very place he sat:

The apartment is on the front corner of the building, so has a view of both Post and Hyde. Here’s a view from the Post Street window: 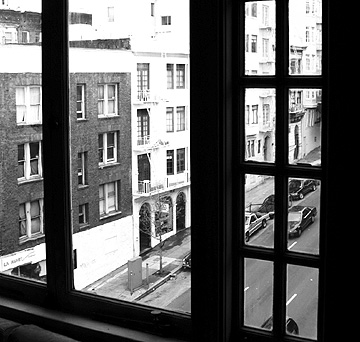 And here’s the view from the Hyde window: 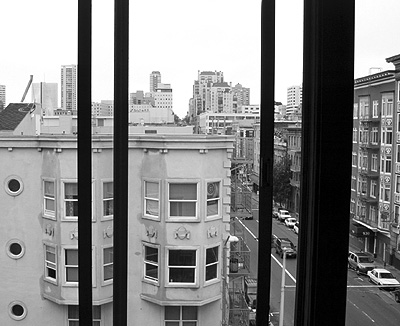 Bill has done some work to restore the interior of the bedroom/living room to the sort of appearance it might have had in Hammett’s time. Here’s a desk he’s set up near the wall-bed: 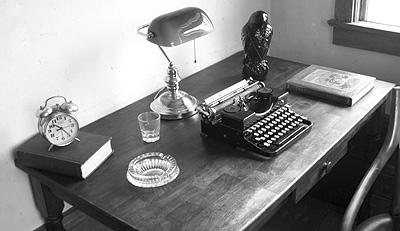 Note the book with the alarm clock on top. That book is Duke’s Celebrated Criminal Cases of America and Bill said he had a hell of a time trying to find it. Why bother? Check out this passage from the Falcon where Spade is woken after Archer is found murdered:

Cold steamy air blew in through two open windows, bringing with it half a dozen times a minute the Alcatraz foghorn’s dull moaning. A tinny alarm-clock, insecurely mounted on a corner of Drake’s Celebrated Criminal Cases of America–face down on the table–held its hands at five minutes past two.

Finally, here’s the picture I’m most pleased to have captured: a shot of me with Jo Hammett not three feet from where The Maltese Falcon was written! 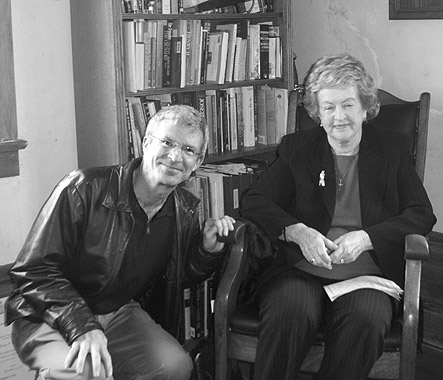 One interesting thing Jo told us during our (all too short visit) is that the correct pronunciation of Hammett’s first name is more Da-sheel than Dash-el. I’ve almost always heard it pronounced with the emphasis on the first syllable, which makes sense since some people simply called Hammett “Dash”.

Mark Coggins is the award-winning author of seven novels featuring private eye August Riordan. If you enjoyed The Maltese Falcon, you may like his latest effort, The Dead Beat Scroll, a modern retelling that was called a “Glorious potpourri of violence, black humor, … sex, and a hunt for a lost manuscript” by the New York Journal of Books.